Anderson Ranch is elated to welcome 16 new residents for the Fall Artist-in-Residency program from October 5 – December 14, 2022. The artists spend their time creating work on campus and engaging with the community.

Justin Bailey (he/him) is a designer and Assistant Professor of foundations in the Eskenazi School of Art, Architecture and Design at Indiana University Bloomington. Studying bending and intersecting forms, the element of surface is an ongoing muse as it lends itself readily to a wide array of utility ranging from living, seating, diffusing, or simply containing.

Viola Bordon is a Philadelphia-based artist and educator who works inter-disciplinarily between sculpture, drawing, printmaking, and fibers. Bordon graduated with an MFA from the University of Pennsylvania, and a BFA from Washington University in St. Louis. She’s interested in preindustrial modes of craft production and has pursued that interest through extensive travel. Themes of home, femininity, faith, body, and connection to land, reoccur throughout her work. She loves to cook and is always down to make a masterpiece out of leftovers.

Luka Carter is an interdisciplinary artist who lived on a boat for three years in Rockaway Beach, NY, an airstream in Bolinas, CA and plenty of places in between. The friends and community that he finds in each of these places has allowed for a strong, beautiful network of friendship and artistic collaboration. With a background in cooking and construction, Luka has a knack for making space for art in overlooked or interstitial spaces–– including an outhouse, abandoned lot, and a van. His practice spans zines, furniture, tattoos, ceramics, clothing, and installations.

My work is concerned with object/context relationships and explores themes related to class, taste, gender, identity, and display.
I work with photography and sculpture by creating installations with ready-made objects, as well as constructing miniature maquette’s that I use to photograph found objects, to create lucid comments surrounding the objects in question, and how these are represented within specific contexts.
With the distortion of scale and the use of three-dimensional and two-dimensional space, my work questions the viewer’s relationship and our visual certainties to raise issues around the role of viewing and receiving art.
In addition to this, my work is concerned with creating a space in which to operate between social and cultural norms. The objects and images, although familiar, act as metaphors to address an idea of displacement, and sample a range of varied elements in order to create my own sense of geographic and cultural place through the spaces that I build.

Daniel is a Queer and Trans Artist focusing mostly in ceramics. Through ceramics he creates bodily forms that resist the limitations of biological and systematic structure, and reach towards an amorphous body. Dan utilizes his past experiences of gender dysphoria, relationships, and ‘home’ to influence his work. He grew up in the Pacific Northwest, where the coastal and mountainous erosion qualities have inspired the textures and surfacing techniques in his work. From the University of Washington he has received a BA with honors in 3D4M, alongside a minor in Art History. He currently resides in Seattle, WA where he makes art, lies on beaches, and works for a local orchard.

Hyunsuk Erickson (b. 1969, Seoul, Korea) is a multidisciplinary artist and art instructor with a career spanning over 40 years. She started as a painter and mixed media artist in Korea, where she received a degree in fine art. These works were shown in solo and group shows, both nationally and internationally.

She asserts the failures of our consumption, including the lasting presence of plastics and other industrial consumer products. These materials transform something alarming and uncomfortable into new forms that grow in beautiful and unsettling ways. Her work is symbolic of the duality of her cultures – her cultural spirit and her experience of the American materialistic world reflected on her body of work.

Jon Greene is a visual artist and printmaker whose work depicts architectural and environmental boundaries. He draws from research and personal experiences in psychoanalysis and nature. Jon specializes in lithography, relief, and installation. He completed Tamarind Institute’s Printer Training Program in 2019 and an MFA at The University of Iowa this past May. Jon has exhibited his work internationally, including at Zane Bennett Contemporary Art Gallery in Santa Fe New Mexico, and The Fig Bilbao International Printmaking and Art on Paper Festival in Bilbao, Spain. In the coming months, he will be a resident at the Anderson Ranch and the CIEC Foundation in Betanzos, Spain.

Rey Londres (b. 1999 Holguin, Cuba; now lives in Miami, FL) is a photographer and curator working to capture stories from every point in the social spectrum, focusing on those who have yet to share their own. Their practice exists as a democratization of the studio and its aesthetics through collaboration.

Born in Fairbanks, Alaska in the 1970’s, Robert La Montagne spent the short bright summers and long dark winters of his childhood taking wilderness trips, gardening, building the family home with recycled materials, and living a creative life. At 19 he left Alaska to travel to Asia, sparking a lifelong passion. After studying fine arts at the University of Alaska, La Montagne started a residential building business in Fairbanks.

La Montagne learned the process of murrine (glass mosaic) and cane work and began to create hollow sculpture forms. He soon brought together traditional Alaskan wood carving techniques with these glass sculptural forms. Current works combine this visual language with his life experience, transforming these sculptures into a personal reflection of life in northern latitudes. La Montagne has studied, participated in residences and assistance ships at The Penland School of Craft, Pilchuck glass School, Sonoran Glass Academy and Anderson Ranch Arts Center. His work is shown from Alaska to Colorado.

Andrea Oliver Roberts is a multidisciplinary artist and musician based in Treaty 1 Territory, Winnipeg, Canada. Known for sound installations that contend with the voice and belief within techno-capitalism, Roberts also performs with the solo experimental sound project VOR. They have shared their work at galleries, project spaces, and festivals internationally, with recent presentations including Send + Receive Festival of Sound Art, Plug In ICA STAGES Biennial, TRUCK Gallery, SOMArts San Francisco, and The Auxiliary UK. A 2022 MacDowell Fellow and 2021 Sobey Longlist awardee, Roberts hold an MFA from California College of the Arts and a BFA from the University of Manitoba.

Tatiana Simonova is a Bulgarian-born, Portland, OR-based artist and educator. She works in printmaking and drawing, choosing her media as a strategy to explore recording, repeating, memorizing, obscuring and destroying. Simonova has exhibited nationally at David Krut Projects, Heidi Cho Gallery, Storefront Ten Eyck and IPCNY in NYC, SPACE Gallery in Portland, ME and Nine Gallery in Portland, OR among others, and internationally in Japan, South Korea, Spain and Hungary. She has participated in residencies at the Santa Fe Art Institute, Can Serrat Art Center, Vermont Studio Center and most recently has been selected as a fellow at Mokuhanga Innovation Laboratory in Kawaguchiko, Japan.

Rexy Tseng (b. 1986) is a visual artist who works primarily in painting and installation. His art practice derives from the dark humor and unrequited desires found within contemporary living conditions. Blurring human forms and objects, Tseng’s works press sensations against logic. By expanding on intimate observations, Tseng stages the unresolved past with possible futures, where he addresses personal politics, technological flaws, traumas, and emotional residues. Born and raised in Taipei until the age of thirteen, Tseng relocated to upstate New York to further his education. He received a BFA from Carnegie Mellon University in 2009, he attended MFA at UCLA in 2012, and he attended MFA at University of Oxford in 2017. Between degrees, Tseng worked as a software engineer in San Francisco, Los Angeles, and New York. Tseng has exhibited in Armenia, China, Denmark, Finland, Germany, Hungary, Iceland, Italy, Japan, Lithuania, Russia, Taiwan, the U.K., and the U.S.. He has participated in artist residencies internationally, including Cite internationale des arts, National Museum of Modern and Contemporary Art (Korea), Organhaus, Sichuan Fine Arts Institute, and more.

Amythest Hultman Warrington was born in Iowa City, Iowa, but she was raised in a mobile military family growing up around the U.S. and Europe. She received her Bachelor of Fine Art in ceramics, with minors in Art and Art History from the University of northern Iowa in 2014. While Working on her bachelor’s degree, she studied abroad at the Jingdezhen Ceramic Institute, through West Virginia University’s China Program. In 2021, Warrington received her Master of Fine Art emphasizing in Ceramics, with a minor in Textiles, Merchandising and Fashion Design.

Her mobile upbringing taught her that the details may differ from group to group but the essence or core experiences surrounding loss, empathy and belonging are a universal language connecting us all. Amythest’s work explores the dichotomy between strength and frailty associated with these universal connectors through clay’s unique physical properties of malleability, recyclability, and permanence once fired.

Growing up estranged from the Patois of my heritage, I came to see the kitchen, enlivened with the staccato rattle of pot covers over a rolling boil, cry of marinated meats touching scalding oil and dulcet notes of ginger, allspice and burnt sugar held aloft by humid heat, as my tether to Jamaica. As a child of the Five Boroughs, I grew to love the velveteen tenderness of a spinach knish, the enrapturing scorch of chili-laden minced pork and the titillating crisp of peppermint dark chocolate as much as I do the unctuousness of cow-foot soup.

Texture, flavor and heat are my work; paintings made in homage to the bevy of cuisines that I have had the privilege to encounter. Layers of luscious whorls draw the viewer into fields of color which frequently operate with coded references to my histories; one, generations-long in the Antilles and another burgeoning within the Five Boroughs. Through this interplay of motif and materiality, the viewer’s own tethers to comfort, heritage and home are brought into focus.

I’m building a visual Patois, a body of work through which I can triangulate myself between the Caribbean, New York and the innumerable cultures and cuisines yet encountered.

Past Artists-in-Residence in the Studios 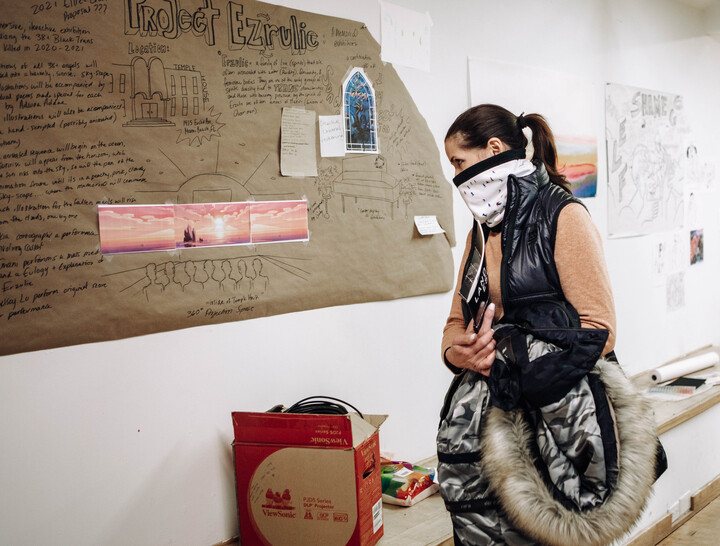 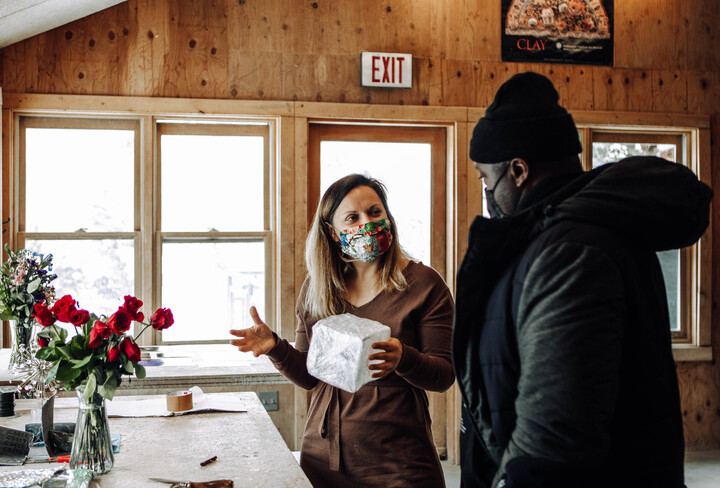 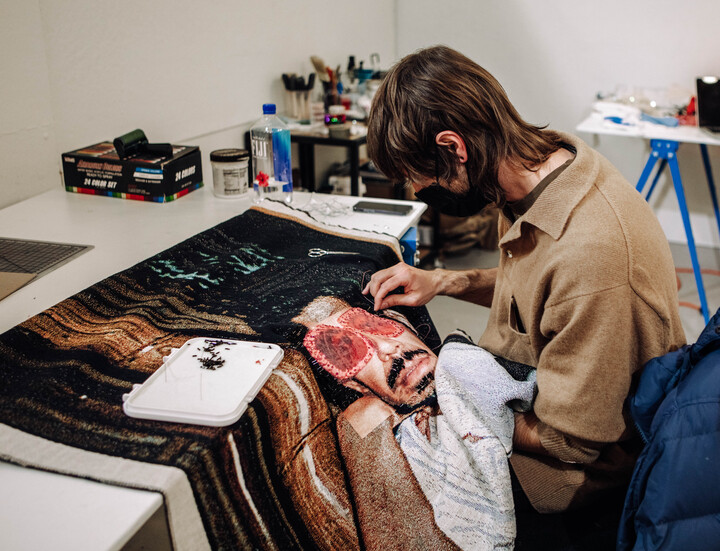 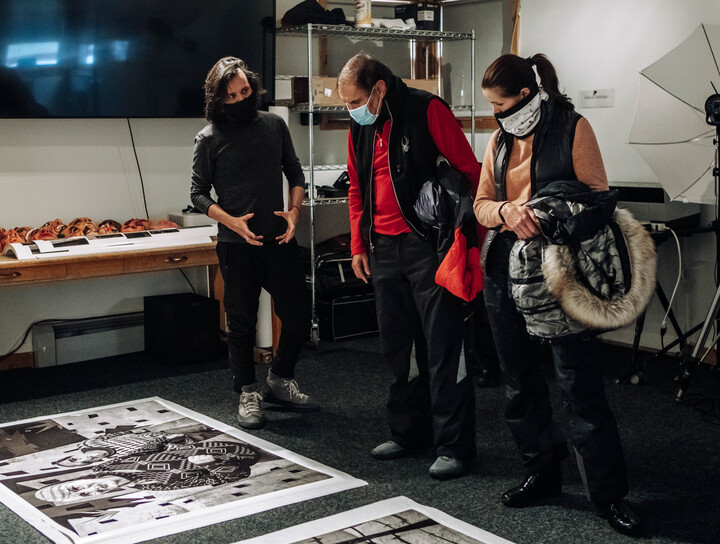 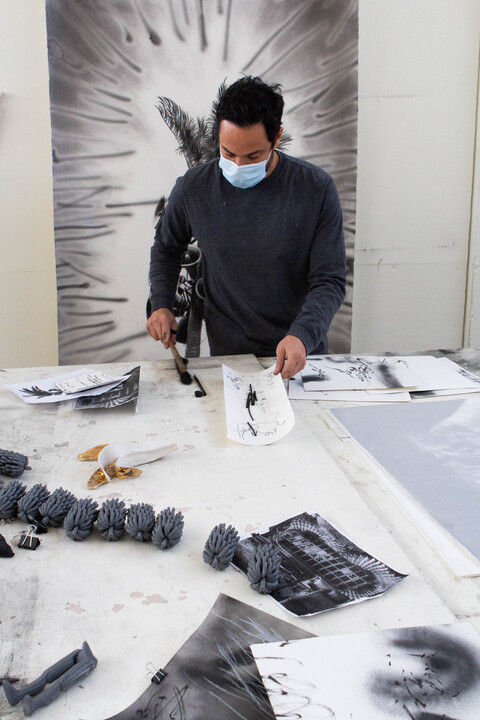 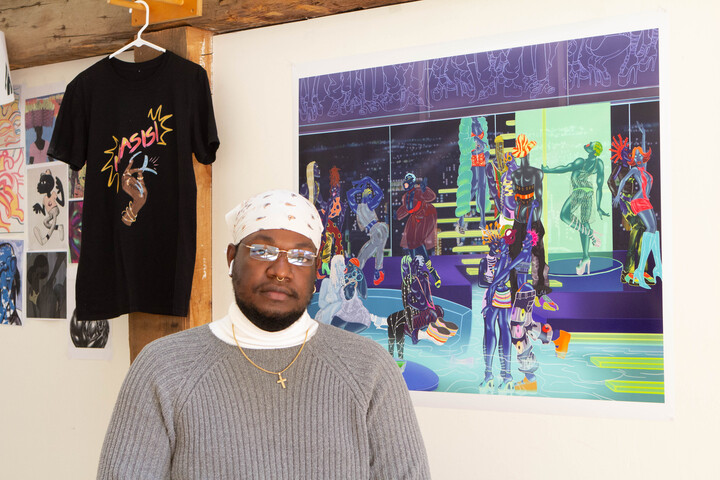 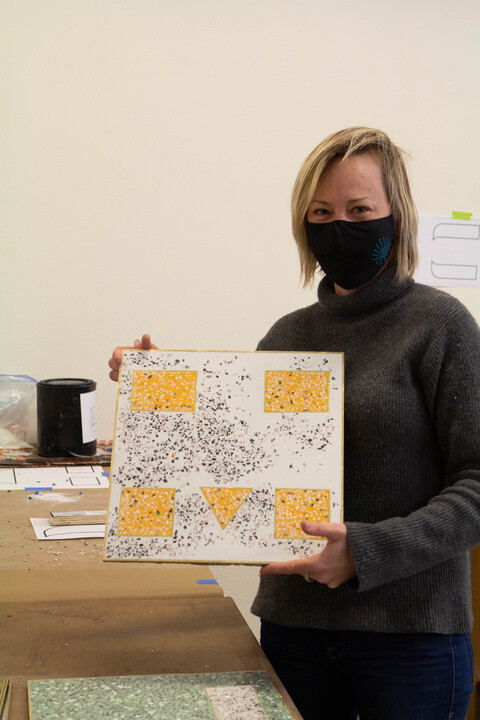 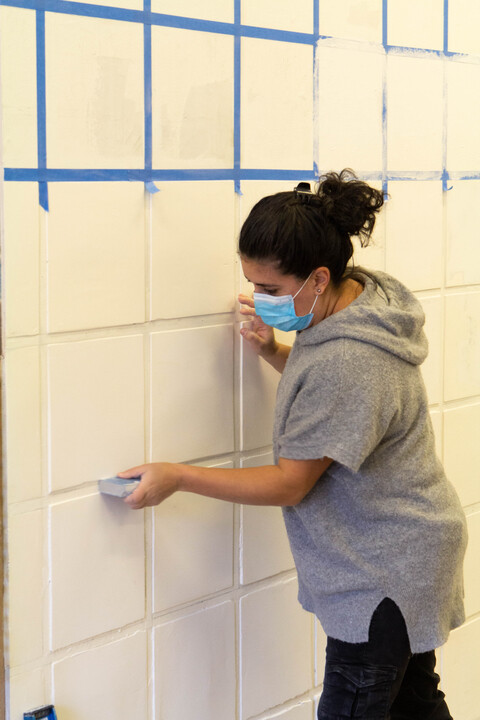 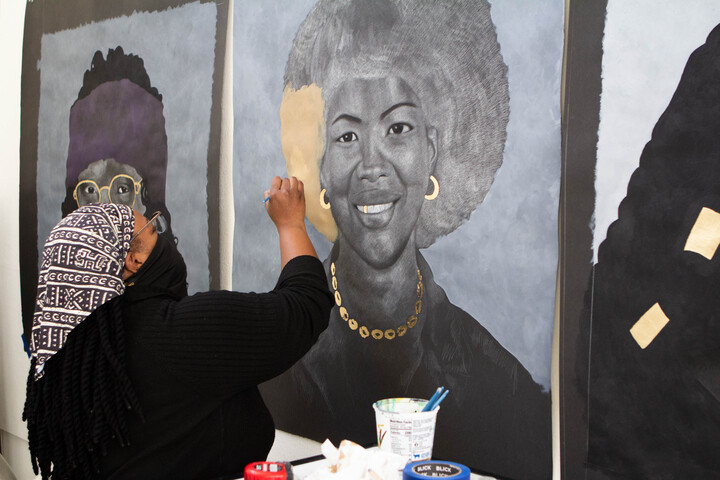