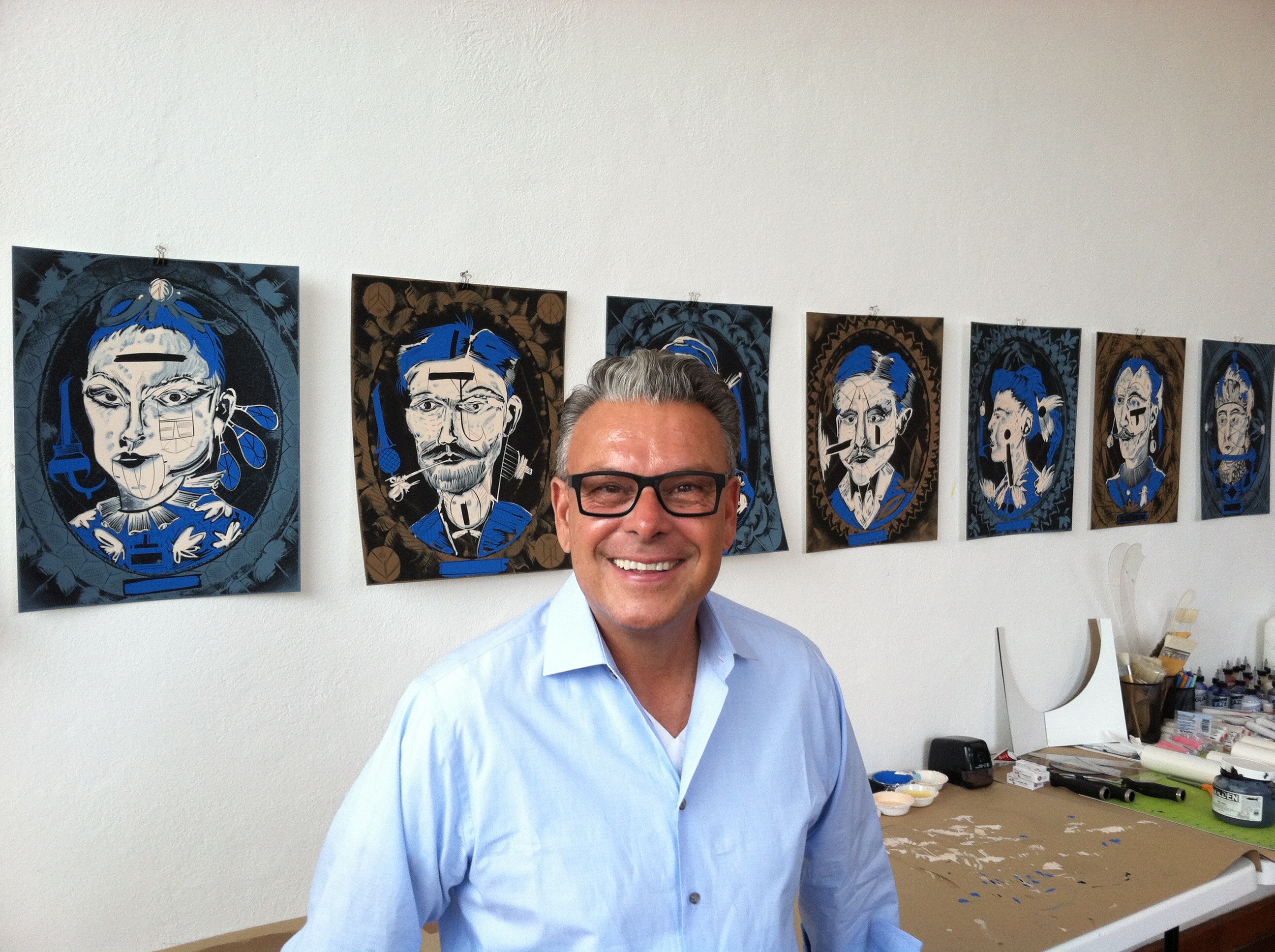 Lari Pittman (b. 1952 Los Angeles, California) received both a BFA (1974) and an MFA (1976) from California Institute of the Arts, Valencia. Since 1993, he has held the position of Professor of Fine Arts at the University of California, Los Angeles.

Inspired by commercial advertising, folk art, and decorative traditions, his meticulously layered paintings transform pattern and signage into luxurious scenes fraught with complexity, difference, and desire. In a manner both visually gripping and psychologically strange, Pittman’s hallucinatory works reference myriad aesthetic styles, from Victorian silhouettes to social realist murals to Mexican “retablos.” He uses anthropomorphic depictions of furniture, weapons, and animals—loaded with symbolism—to convey themes of romantic love, violence, and mortality. His paintings and drawings are a personal rebellion against rigid, puritanical dichotomies. They demonstrate the complementary nature of beauty and suffering, pain and pleasure—and direct the viewer’s attention to bittersweet experiences and the value of sentimentality in art. Despite subject matter that changes from series to series, Pittman’s deployment of simultaneously occurring narratives and opulent imagery reflects the rich heterogeneity of American society, the artist’s Colombian heritage, and the distorting effects of hyper- capitalism on everyday life.

A major solo exhibition of his work titled, Lari Pittman: Declaration of Independence, will be held at the Hammer Museum, Los Angeles in September 2019. His work has been the subject of numerous solo exhibitions, including The Huntington Library, Art Collections, and Botanical Gardens, San Marino (2017); Museum of Contemporary Art, St. Louis (2013); Le Consortium, Dijon, France (2013); Institute of Contemporary Arts, London (1998); Los Angeles County Museum of Art (1996); and the Contemporary Arts Museum, Houston (1996); among many others. He has participated in the Venice Biennale (2003); Documenta X (1997); and four Whitney Biennial exhibitions (1985, 1993, 1995, 1997). A comprehensive monograph of his works was published by Rizzoli (2011), and catalogues were published on the occasion of his Le Consortium, Dijon and Museum of Contemporary Art, St. Louis exhibitions.

Pittman has received many awards, including the Skowhegan Medal (2002); three fellowships from the National Endowment for the Arts (1987, 1989, 1993); and the International Association of Art Critics’ award for the Best Show in a Commercial Gallery Nationally (2010, 2013).