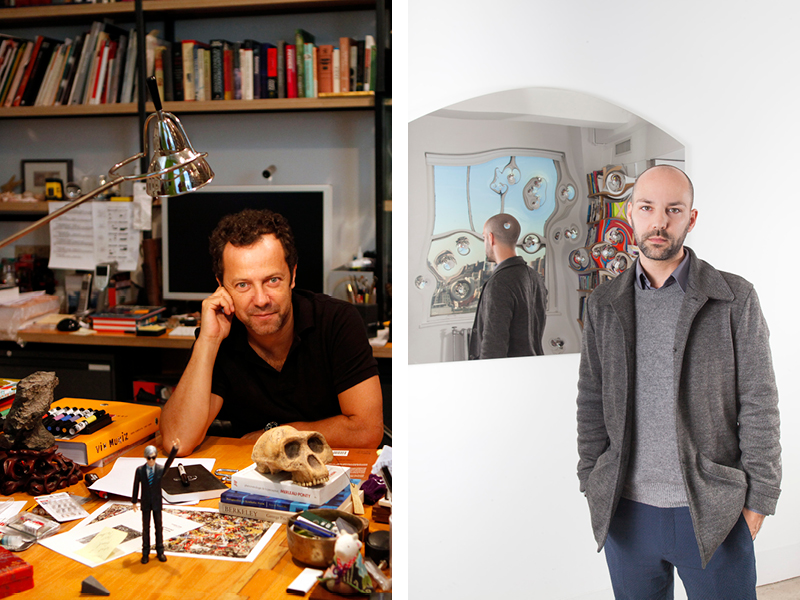 Vik Muniz
Born 1961, São Paulo, Brazil, Vik lives and works in New York City and Rio de Janeiro. Photographer and mixed-media artist Vik Muniz is best known for repurposing everyday materials for intricate and heavily layered recreations of canonical artworks. Muniz works in a range of media, from trash to peanut butter and jelly, the latter used to recreate Andy Warhol’s famous Double Mona Lisa (1963) that was in turn an appropriation of Da Vinci’s original. Layered appropriation is a consistent theme in Muniz’s work: in 2008, he undertook a large-scale project in Brazil, photographing trash-pickers as figures from emblematic paintings, such as Jacques-Louis David’s Neoclassical Death of Marat, and then recreating the photographs in large-scale arrangements of trash. The project was documented in the 2010 film Waste Land in an attempt to raise awareness for urban poverty. Muniz explained the work as a “step away from the realm of fine art,” wanting instead to “change the lives of people with the same materials they deal with every day.”

Renaud Proch
Renaud Proch is Independent Curators International (ICI)’s Executive Director, and from 2009 to 2013, he served as ICI’s Deputy Director. Prior to this he was Senior Director at the Project in New York, where he worked on developing the careers of a roster of 21 artists, as well as Director of MC, a Los Angeles gallery dedicated to the production and presentation of new solo projects by internationally established artists. Originally from Switzerland, Proch studied in London, and moved to the West Coast of the U.S. in 2001. He co-founded ART2102 of Los Angeles in 2003, a non-profit organization that realized projects by artists and curators on- and off-site; and the backroom in 2005, an evolving archive of artists’ source materials and itinerant research project presented in five cities in the U.S., Mexico and France. In 2011, he co-curated with Khwezi Gule a retrospective of South African artist Tracey Rose for the Johannesburg Art Gallery, South Africa, and the Umea Bildmuseet, Sweden, which also traveled to the Nikolaj Kunsthal, in Copenhagen, Denmark.