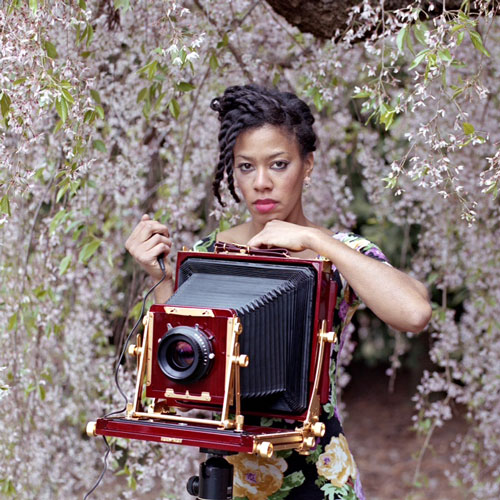 Deana Lawson is a photo-based artist born in Rochester, NY. She received her M.F.A. in Photography from RISD in 2004. Her work examines the body’s ability to channel personal and social histories, addressing themes of familial legacy, community, desire, and religious-spiritual aesthetics. Her practice borrows from simultaneous visual traditions, ranging from photographic and figurative portraiture, social documentary aesthetics, and vernacular family album photographs. Lawson meets her subjects in everyday walks of life: grocery stores, subway trains, busy avenues in Bedstuy, Brooklyn, and road trips taken to the American south. Lawson received the prestigious Guggenheim Fellowship in 2013, which gave her the opportunity to photograph internationally. She has photographed in DR Congo, Haiti, Jamaica, Ethiopia, Ghana, and Brazil. Lawson has exhibited work at the Carnegie Museum, the Underground Museum, the Whitney Biennial, Huis Marseille Museum for Photography, and others. Her work has been published in ArtForum, TIME Magazine, The New Yorker, and Aperture.  Lawson has upcoming solo exhibitions opening at the Kunsthalle Museum in Basel, Switzerland in March 2020, and at the Bienal de São Paulo in Brazil in July 2020. She is currently a Professor of Photography at Princeton University.