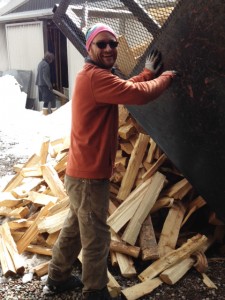 Every year, Anderson Ranch receives twenty cords of “standing dead” timber through a wood auction hosted by Mountain Fuel, based in Delta, Colo.  Mountain Fuel teams up with the National Forest Service and auctions off dead trees in order promote environmentally friendly services and sustain our forests.

Within the past five years, the Ranch has purchased Doug-fir and Subalpine Fir for the fuel used in wood kiln firing. In April, we received five cords of wood, which will last until mid May. During the summer, when we are busy with workshops, the ceramic studios burn a quart a day, usually requiring 3 – 4 deliveries throughout the season. Firing the wood kilns involve multiple hands and can consists of 4-hour shifts over a 3 – 4 day time period. 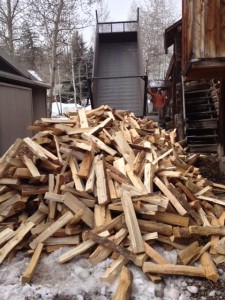 Time for the wood stacking party to begin!

Since wood varies in quality, it is nearly impossible to predict the outcome of the artwork. Weather also plays a key contributor as temperatures/air draft effect the texture, color and characteristic of each piece. Ideally, a cold atmosphere and clear day are the best conditions to fire. However, most ceramists would argue that the beauty of firing is the unexpected, and not having complete control of the practice is what makes ceramics unique.

The Ranch is proud of endorsing an eco-friendly community and welcomes local communities to participate in the firing practice.