Anderson Ranch Arts Center Artistic Director, Jenene Nagy, has an exhibit on view at The North View Gallery at Portland Community College (Sylvania Campus).  The Crystal Land, on view January 7 to February 8, 2014, is a new, site-specific installation that continues Nagy’s investigation into the boundary of the natural and built environment. The work proposes a utopian space while exploiting the latent potential of the gallery structure.

Using materials commonly associated with commercial building and fabrication, the work will encompass the entire space of the North View Gallery. Constructed of latex house paint, Tyvek, Plexiglas and fluorescent light, The Crystal Land will challenge viewers’ perception of space in geographical and cultural terms.  Using Robert Smithson’s essay of the same name as a launching point, The Crystal Land re-contextualizes these materials into a conceptually complex but formally paired down meditation on quotidian space.

Nagy will provide a talk on January 29, from 2 to 3 p.m., followed by a closing reception. 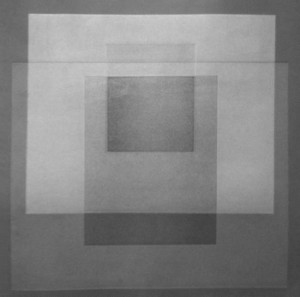 In addition to her work on view in at the North View Gallery, Nagy’s work is also currently featured in a group show at PDX Contemporary Art, a gallery in Portland.

In the exhibit titled I Never Complained About the Past: New Work/New Year, Nagy will show new monotypes that continue to push her understanding of perceived space and reflect the stark beauty of winter in the Rocky Mountains.

The PDX Contemporary Art exhibit will continue through February 1, 2014.

Jenene Nagy received her B.F.A. from the University of Arizona in 1998 and her M.F.A. from the University of Oregon in 2004. Nagy’s work has been exhibited nationally and internationally at venues including the Portland Art Museum, Weatherspoon Art Museum, Torrance Art Museum, Takt Kunstprojektraum in Berlin, Germany, and Dam Stuhltrager in NY, among others. She has received grants from the NY Foundation for Contemporary Art, the Ford Family Foundation, Colorado Creative Industries, and the Oregon Arts Commission. Her work was named by the Huffington Post as one of the Northwest’s Top Ten Exhibition Picks of 2012. Along with a rigorous studio practice, Nagy is one half of the curatorial team TILT Export:, an independent art initiative with no fixed location, working in partnership with a variety of venues to produce exhibitions. From 2011-12 she was the Curator-in-Residence for Disjecta Contemporary Art Center in Portland, Oregon and currently serves as the Artistic Director of Painting and Printmaking at Anderson Ranch Arts Center.