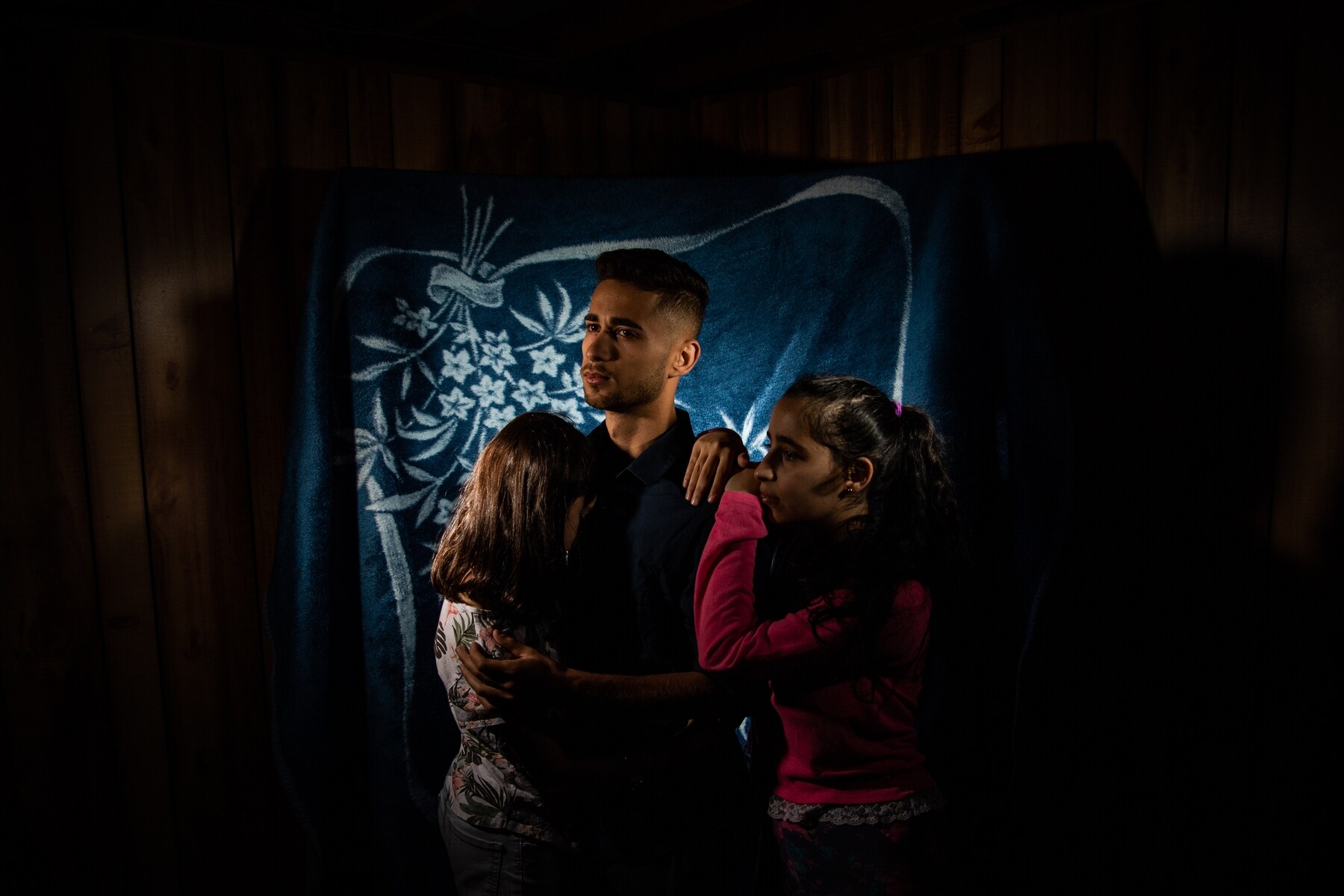 Salwan Georges is a Pulitzer Prize-winning photojournalist for The Washington Post. Before joining The Post, he was a staff photographer at the Detroit Free Press. He was also a part of the first photojournalism cohort of the Anderson Ranch Arts Center for Advanced Mentorship Studies (The Center). In 2021, Georges was named Photographer of The Year by Pictures of the Year International for covering a racial reckoning in Minneapolis, an unforgettable election across the U.S., and a deadly pandemic. We sat down with him earlier this year to talk about his year leading up to that award, his time at Anderson Ranch, and the benefits of going through The Center.

Georges began 2020 embedded with Senator Bernie Sanders on assignment for the upcoming election. All of a sudden, rallies were cancelled, lockdown started, and he was sent back home. However, photojournalists still had to work—only now with masks—documenting the crisis. He found himself in Minneapolis a few days after protests began in response to George Floyd’s death. There for 11 days, Georges followed the crisis minute by minute, never knowing where the photos would lead.

After Minneapolis, he heard of Iraqi orphans, recent refugees living in Michigan, who lost both of their parents to Covid-19. Reflecting on that project, Georges said, “That story was very special to me, because how do you approach children who lost both of their parents, who rely on them for everything in life? For me, it took a lot of time to go there without my camera, to gain their trust.” Even without photographing, Georges said he could feel the sadness, the great loss, surrounding these children. It was a constant question as to how to photograph in the most respectful way. “You’re showing up to these children you’ve just met a couple of days ago, now pointing a camera at them. There are a lot of moments I chose not to photograph out of respect. It wasn’t a regular story; it was something very tragic.” The work took more than three weeks to put together, and Georges remains in touch with the children to this day. “All I wanted was to tell their story and hope my work brings attention to their life and makes their life better. I call them every time I’m in Michigan. I check up on them whenever I can. They taught me a lesson in my photography as I spent that time with them and told their story.” One pieces from that body of work was on display in the Patton-Malott Gallery at Anderson Ranch as a part of “Essential Images,” an exhibition highlighting the perspective of seven photojournalists during Covid-19.

After completing the series of images with the orphans, Georges returned to photographing the United States Presidential Election. He decided to position himself in Michigan, where he grew up, covering everything from Former President Trump rallies to events with now President Biden. During Covid-19, Georges mentioned how difficult it was to be a photojournalist. “We had to travel and be on planes during lockdown when other people weren’t traveling. It was added stress and added work. After 15 hours of photographing, I would have to come back to my room and wipe everything down, clean everything.”

Speaking on one of his favorite photos from the election, he said, “On purpose, I flew back during the last debate. Hopefully, if my flight had TV, maybe someone is watching the debate. Maybe someone at the airport would be watching on those giant TVs. I got on this Delta flight from Detroit to D.C. and shockingly I walked onto my flight and everyone is watching the debate. I didn’t have my camera with me, so I took my phone and took that photo and it went viral. Sometimes you just get surprised by things like that. I planned for it, but I didn’t plan for that!” 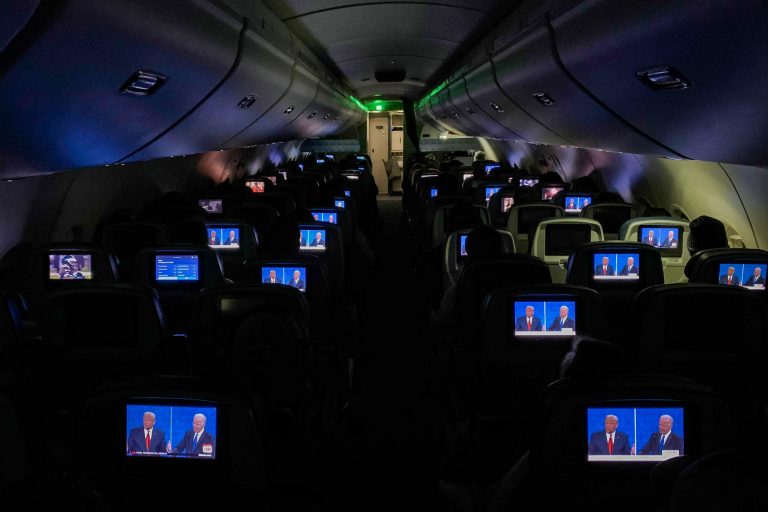 The Center is a three-year program, where over the summer, a cohort will meet at the Ranch for one week. Throughout the rest of the year, the cohort engages in virtual dialogs every two weeks. We asked Georges to walk us through his time at Anderson Ranch and how it helped him develop as a photojournalist. During his first year at the Ranch, he was freelancing and subsequently hired at the Detroit Free Press. During his second year, he was hired by The Washington Post, where he continues to work. He began the Center program with a body of work covering the Iraqi community in Michigan. While he arrived with one body of work, he developed a completely different one while at the Ranch. “That week was super inspiring to see everyone’s work and seeing everyone’s growth,” he said. “It wasn’t only me or a few of us, everyone grew. The networking that helped publish a lot of these bodies of work was amazing.”

In addition to providing a cohort of peers, each Center program is managed by professionals with extensive career expertise. In the photojournalism program, that’s Ed Kashi and James Estrin. For Georges, and many others in his cohort, “having someone like Ed and Jim was very luxurious. Because these guys are experts in what they do, they really, really helped us develop our work.”

When we asked Georges about returning to the Ranch, we were thrilled to hear he can’t wait to be back. “I live a very busy life, but I feel like when I’m up there I can relax a little bit. I can sort of develop ideas and start thinking about new ideas. I really recommend people getting up there, even if it’s just a one-week workshop.” And for students considering the Center, he says, “If someone has a body of work and wants to develop it, they should really consider the three-year program, because it really is a conversation. It’s hard to have a conversation with people because everyone is busy, but if you want to take a body of work and develop it, it’s important to talk to people who are interested to help you. And at the Ranch there’s a lot of great people who want to help you take your body of work to the next level.”

To this day, Georges and his group still talk. While they finished their program two years ago, he says the Center really “brought this group of strangers together and made them super-close friends.” They check in, share work, share personal developments and ask questions of each other. From discussing dealing with trauma, sensitivity to subjects, and developing skills to fair prices for freelancing, managing time and schedule, their group remains a great resource for each other. More than just friends, Georges said, “It brought us like a family together. Really, thanks to Ed and Jim to perfecting that program. People published books, won big awards with the work they created at the Ranch.” And perhaps the best endorsement of all: “I wish I could go back and do it all over again.” 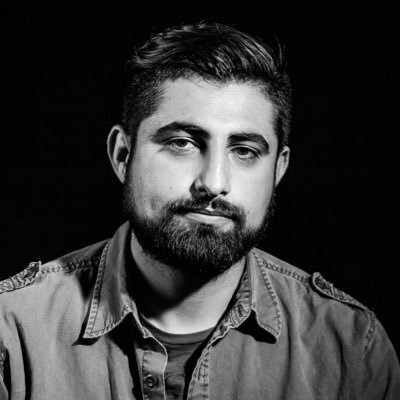