The talented artists that will be visiting Anderson Ranch in 2014 are quite exceptional  – including Duncan Gowdy, an accomplished furniture designer with more than 20 years dedicated to his craft.  Mr. Gowdy will be a guest faculty member for one of the Ranch’s furniture design workshops next summer. 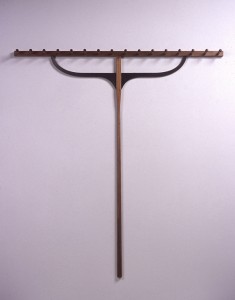 The basic forms of Early American folk art serve as inspiration for Gowdy’s object-inspired work.  He combines several construction methods, from mortise and tenon, to metal work and turning, to both hand and machine shaping. One of Gowdy’s recent pieces, Autumn, is in the form of an old wooden rake and serves a similar purpose to a Shaker pegboard.

“I like to make casework pieces of furniture for the image inspired work,” said Gowdy.  “The minimalist forms act as frames for the imagery. My camera is the main tool for collecting images that form the basis for this work. I crop images and project an image before carving and staining it into the wood. “

Another example of this process includes a photograph of the Charles River, taken in early spring, led to the design of the “Charles River Blanket Chest.”

Gowdy’s piece, Autumn, will be featured in an upcoming exhibit, Made in Massachusetts: Studio Furniture of the Bay State, which will be on view at the Fuller Craft Museum, October 12, 2013 – February 9, 2014. This exhibition is a product of Four Centuries of Massachusetts Furniture, a collaborative project of Fuller Craft Museum and ten other institutions that features exhibitions, lectures, demonstrations, and publications to celebrate the Bay State’s legacy of furniture-making.