On view in the Patton-Malott Gallery until May 27 is a joint exhibit, titled Foundations: New Works with artwork by Josh Dannin and Paige Ward.  Sharing a similar aesthetic and subject matter – the house – the exhibit showcases significantly contrasting concepts and inspirations. 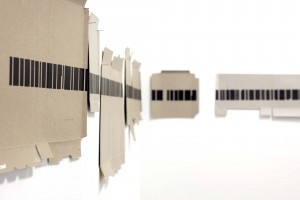 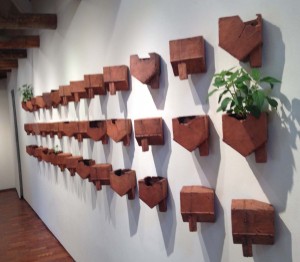 Josh Dannin uses printmaking processes and utilitarian materials to examine and deconstruct the seriality and modularity of his native southeast Pennsylvania. Largely motivated by the assembly line production of America’s earliest suburban architecture, Dannin creates compositions that are at once familiar and foreign, walking the line between representation and abstraction.

Paige Ward works primarily with ceramic materials, using the house form as a symbol for home and family. She illustrates the destruction of the family structure and the importance of preserving the home’s traditional foundation. Establishing the home as a place of stability and safety, her work seeks to illustrate the universal longing for that sanctuary.

Together, Dannin and Ward present an exhibition of two- and three-dimensional works with striking similarities and differences, illustrating two unique interpretations of the house theme that they both explore.

Paige Ward is an artist and sculptor from Frog Jump, Tenn.  She received her B.A. in ceramics from Union University in Jackson, Tennessee in 2010.  She currently is on staff in the Department of Art at Union University as a Shop Technician and as a Ceramics Instructor at Mudslingers Studio in Huntingdon, Tenn.  She has participated in internships at Arrowmont School of Arts and Crafts in Gatlinburg, Tennessee. and Anderson Ranch Arts Center.  She will begin the pursuit of her M.F.A. in ceramics at the University of Florida in August 2014.

Josh Dannin is an artist and printmaker from Philadelphia, Pennsylvania., living and working in Athens, Ohio.  He received his B.F.A. in printmaking and photography from Kutztown University in 2011 and is currently pursuing his M.F.A. in printmaking at Ohio University. Josh is a contributing writer and photographer at Printeresting.org: The thinking person’s favorite resource for interesting print miscellany. His work has been exhibited both nationally and internationally.