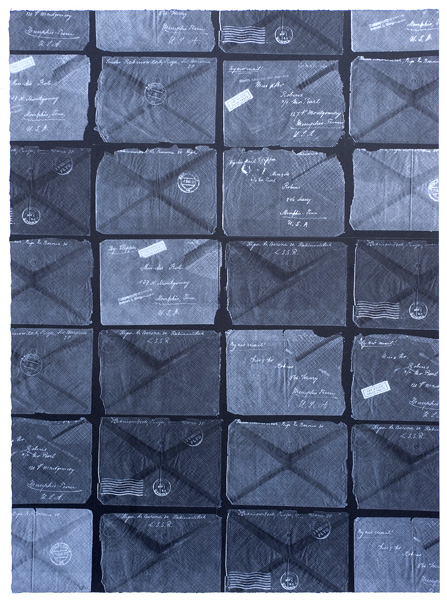 Aspen/Snowmass, Colo. — Anderson Ranch Arts Center, a premier art making destination and catalyst for critical dialogue in the contemporary art world, will present a solo exhibition of new works by Bunny Burson entitled “Traces.” The exhibition consists of a dozen prints and installations on view at the Patton-Malott Gallery at Anderson Ranch Arts Center in Snowmass Village, Colo., September 8 – October 26, Monday through Friday, 9:00 AM – 5:00 PM. The public is invited to a special opening reception taking place Tuesday, September 8, 5:00 – 7:00 PM.

“Traces” will showcase works by Burson that tell the story of her family history—both the spoken and the unspoken history—which has defined her work over the past five years, revealing universal topics to which all can relate. Pieces include embossed prints, laser-cut prints and two sculptural installations, some created in the printmaking and digital FabLab studios at Anderson Ranch. As a printmaker, Burson likes to work with different kinds of paper and different opacities of paper to help tell a story. The media lends itself well to the layers of meaning present in “Traces.”

“My artwork in this exhibition is based upon recently discovered letters from 1939-41, which unbeknownst to me had been in the attic of my family home for over 70 years,” explains Burson. “This show reflects my own history, but I hope it moves from the personal to the universal and stirs the desire we all have to discover who we are by those who came before us.”

The opening reception is free and open to the public. Light refreshments will be served. For more information, please visit andersonranch.org or call 970/923.3181.

Bunny Burson, a native of Memphis, Tenn., is a St. Louis, Mo.-based mixed media artist. She received a B.A. in French from Tulane University, which included a year at the Sorbonne in Paris. She earned a B.F.A. from the Memphis College of Art and an M.F.A. from Washington University in St. Louis. Her work has been exhibited nationally and internationally, including in St. Louis, New York, Memphis, Nashville and Leipzig, Germany. Recent awards include an artist residency at the Cité Internationale des Arts in Paris in 2010 and the Washington University School of Art Award for Distinction in 2013. She is represented by Bruno David Gallery in St. Louis.

Burson serves on the National Councils of the Washington University Sam Fox School of Art and the Gephardt Institute for Public Service, as well as the Board of Trustees of Anderson Ranch Arts Center in Snowmass, Colo., and the Advisory Council of Dieu Donné in New York.